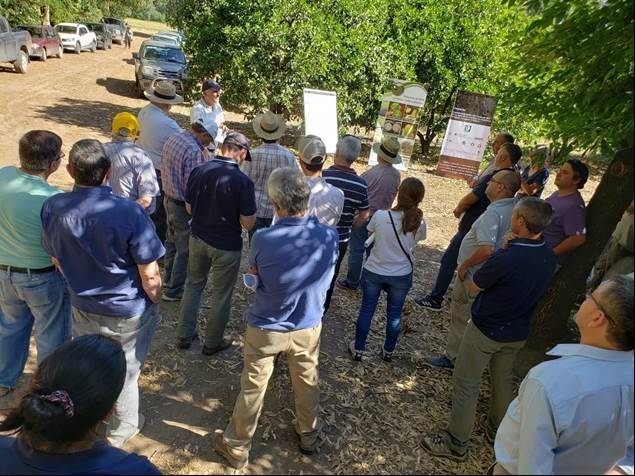 Almost a year has passed since the launching of FONTAGRO Project "Sustainable control of the HLB vector in Family Farming in Argentina, Uruguay, Paraguay and Bolivia". San Pedro’s team located at San Pedro Agricultural Experiment Station, from the National Institute of Agricultural Technology (INTA) Argentina, was the first to select the demonstration lot family citrus establishment, in a participatory way.

Silvana Giancola, researcher at INTAs Center for Research in Economics and prospective studies, leader of the FONTAGRO project, explains, “We promote active participation of territorial actors as a strategy scale up integrated pest management (IPM) technology adoption with a focus on HLB vector in family citriculture. Thus, participative choice of demonstration lots (LD) in family establishments is core to this strategy among the four countries and San Pedro was pioneer in this regard”.

In this sense, she points out: "there was a strong background regarding collective and participatory work in San Pedro, which largely explains wide acceptance and project success in the region.

Norberto Ángel, Head of the Rural Extension Agency (AER) INTA San Pedro and FONTAGRO project local leader, tells us in detail about implementation of collective approach proposed, progress and outcomes: "taking part in a project that deals with HLB vector control, as a tool for preventing the entry of this fearsome disease for citrus fruits in the NE Buenos Aires Province, is considered of utmost importance by professionals who work in citrus growing at EEA INTA San Pedro.

The active involvement of growers and entities linked to the activity, as it was proposed by the project, is necessary and at the same time a big challenge in order to achieve an adequate articulation and the complementary contribution of each partner”.

The session began with a special dynamic, different photos related to HLB were shown, to learn more about the bond and experience of those present with the main theme.

Afterwards, Professionals presented the Project detailing its four components. The importance of selecting the demonstration lot in a participatory manner was emphasized. "It was then agreed that the participation of CAPROEM would be crucial regarding candidates preselection in the preselection," said Angel. On the end of the meeting, some commitments were agreed, and a following meeting was scheduled. A WhatsApp group as a communication channel was established in order to share news, concerns and consultations, one year later this tool is active providing updates, linking participants, not only regarding project s activities, but also in sharing all king of information for the sector. 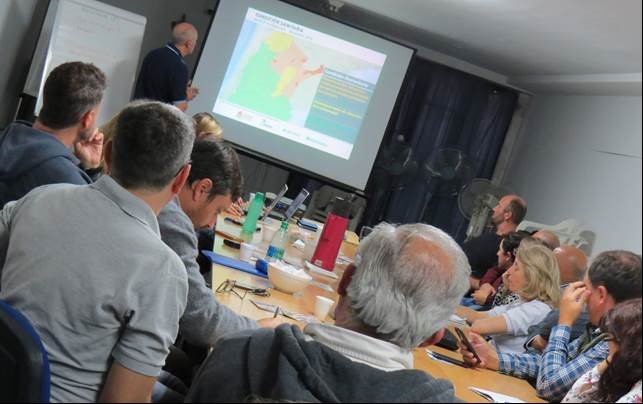 As planned, at the beginning of the crop development season, Juan Carlos Capó s citrus lot became the setting for a second meeting. Therefore, on September 4 Project and presentation of the Demonstration Lot (LD) was officially announced, in the presence of 20 institutions representatives and local media.

The election of the demonstration lot (LD) was widely supported by CAPROEMs President, Alejandro Guzzo, who expressed total agreement with Project requirements: Small family grower; very interested in implementing Integrated Pest and Disease Management (IPM); accessible location and adequate operational capacity to carry out activities; willingness to receive  other growers, professionals and students for training activities. In addition, in the same field there is another lot of the same variety and with similar characteristics as to the demonstration lot, which would be used as a control lot.

Following Guzzo’s speech, attendees expressed their solid agreement. After a field tour, attendees were encourage to shared concerns and questions.

Growers and professionals scheduled another meeting to present progress and extended invitation to more growers in the area.

In addition, given the interest in planning a trip with producers and professionals to an area with the presence of HLB and its vector; Representatives of SENASA and the Undersecretariat for Economic Development committed themselves to organizing this activity and sharing a specific proposal

"Protect our citrus", the phrase that invited to the first meetings became the local slogan of the project. The main goal was to strengthen the level of prevention, participating in two community events: the "Navel Orange Festival" in July; and in the "Technological Showcase for Schools", which is held every year in October.

The decision to participate with an inter-institutional stand in the aforementioned orange festival was not only intended to socialize the problem, but also to consolidate the project's team. Thus, FONTAGROs project was present with its contribution on the HLB control together with CAPROEM, SENASA, INASE, the local Rural Society and the Chamber of citrus nurseries.

It was an opportunity to share videos showing disease effects, and an appropriate context to conduct consumer surveys, as a proxy to the knowledge that “society” has regarding the HLB; and answer general queries and concerns. The idea was to operate some dimensions of the problem, which go beyond the disease, emphasizing prevention (currently San Pedro is vector and disease free).

On the other hand, and with the slogan "Healthy Fruits", the educational sector was targeted at the Technological Showcase with a proposal that combined two axes: prevention of HLB (in its complex view of plant quality, IPM, and importance of citriculture as a source of economic development) and healthy eating.

Juan Carlos is a small citrus farmer linked to local citrus growing for more than 30 years, and many more involved in agriculture. Initially his main activity was to provide different services to other local growers, an activity that he continued when in 1990 he decided to plant the 10 hectares of his property with navel orange, Navel Seedling selection. Very low profile, highly trained and with a close bond with his colleagues, he happily hosted the meeting.

Starting monitoring and other activities

Phenological and  pest and diseases presence monitoring began in October 2019, “this information, loaded in spreadsheets that were unified for all the lots included in the project, was useful to make sanitary decisions, prioritizing the management of the demonstration lot with an IPM approach ”, explains Angel.

In addition, management in the demonstration lot was planned, performing pruning and debrushing, soil breakage in the inter-row with disc and tooth harrow, weed control in the field, row and sanitary treatments according to the results of the monitoring, using agrochemicals relevant to IPM. Then professionals set a sprayer and verified the necessary adjustments that arose after its revision, applying a volume per hectare according to the TRV.

Project s activities were integrated with other fruit activities of interest for growers in the region. This allowed the organization of a "Fruit Tour" joined by more than 40 participants. They visited the demonstration lot and the INTA Experimental Station. It was an instance in which citrus nurserymen, fruit growers and professionals, together with institutions linked to the project, were able to get information, training and discussed different topics related to the activity.

During the visit to the demonstration lot at Juan Carlos Capó s farm, the Project its objectives, components, evaluations, and methodology for selecting the demonstration batch, and its corresponding handling was presented.

Training consisted in detailing several practices as Pruning and soil work, weed control in the row, treatments for pest control and disease prevention, monitoring method used, extraction of soil sample to determine the nutritional status of the crop, sprayer calibration and volume applied per hectare methodology.

In addition, HLB characteristics and symptoms, vector, sampling method, and sanitary status in the region were addressed.

In addition, reference was made to the official launching of FONTAGRO project at Chajarí, Entre Ríos, Argentina (October 22 - 23, 2019) and the field tour that took place there (where vector and disease is present).

At the end of the visit, current state of trees and projections for the 2020 harvest were shared, generating an interesting exchange that continued at the Experimental Station, The last session comprised an intense examination of the fruit collection, the INTA San Pedro Improvement Program, and the outcomes of the “VII Latin American Meeting: Prunus Without Borders held in Uruguay”.

“We ended the first year enlisting great commitment and high interest among local institutions, professionals, students and growers who were willing to continue with periodic meetings and events to discuss, perform different activities and progress report and the convenience of including society in events and actions.

The above mentioned activities were specifically designed to adequately inform about the importance of the disease, the necessary preventing actions, as well as project progress” explained Angel.

To properly close current campaign, yield and fruit quality obtained in both lots must be evaluated, through the implementation of the Phytosanitary Evaluation Method (MEF) as an estimation method; and then, value obtained will be compared with the real ones.

“We still have to set up a meeting with growers and professionals to share this information and start training of monitors, which was delayed by total lockdown due to Pandemic COVID19. However, we will use remote technology that allows us to keep in touch,” says Angel.

After an intense year of work, team project considers a positive balance for the experience: “and we are looking forwards to a promising future, given the interaction, participation and degree of complementarity achieved among participants.

“We will continue with a joint planning looking at 2020 - 2021 campaign beginning next spring, by putting the greatest effort to reach family growers, with focus on participatory work and the scaling up this proposal, which we consider will be successful for all companies in the region" Angel expresses and reflects:  "For those who work in public extension services, we know that learning and adoption processes require time in order to get permanent transformations.”