These are preliminary results obtained in demonstration lots located in family citrus farms in Argentina, Uruguay and Paraguay.

HLB –Huanglongbing– is the most destructive disease affecting citrus worldwide. Caused by the bacterium Candidatus Liberibacter spp., disease spreading responds to use and transportation of infected plant material and/or the presence of the vector Diaphorina citri, as a spreading agent. Since there is no cure, prevention is based on the use of healthy material, constant crop and insect vector monitoring, its control, and early identification of the infected plant for its elimination.

The disease is already all over the American continent. It has been registered in Argentina since 2012 and in Paraguay since 2013. For this reason, and due to the existence of more than 226 hectares with citrus and more than 6,000 family citrus growers in the region's citrus chain, a team of researchers and extensionists from various Institutions promote the implementation of Integrated Management of Pests and Diseases (IPM), over routine applications of non-selective agrochemicals that generate risks and damage to the environment.

Findings are part of an INTA s multi actors project co-financed by the Regional Fund for Agricultural Technology (Fontagro) "Sustainable control of the HLB insect vector in family citrus farming in Argentina, Uruguay, Paraguay and Bolivia."

Results were presented in the framework of the virtual seminar "Experiences on HLB control and eradication in Latin America and the Caribbean" organized by the Inter-American Institute for Cooperation on Agriculture (IICA) Venezuela.

During the meeting, advances in the prevention and control of HLB in Latin America and the Caribbean were presented, with the participation of specialists from Mexico, Venezuela, Argentina, and Brazil, who favored information exchange, prevention and interventions regarding the problem, and the many challenges the region is currently facing.

In this sense and, "based on the periodic monitoring carried out in these lots, a 21% decrease in individuals of Diaphorina citri -vector of HLB- and a 60% increase in natural enemies was evidenced," said Giancola.

In addition, Giancola explained complementary findings that show that IPM would reduce direct production costs, based on timely control of pests and diseases and use of more environmentally friendly products, positively impacting the quality of the harvested fruit. 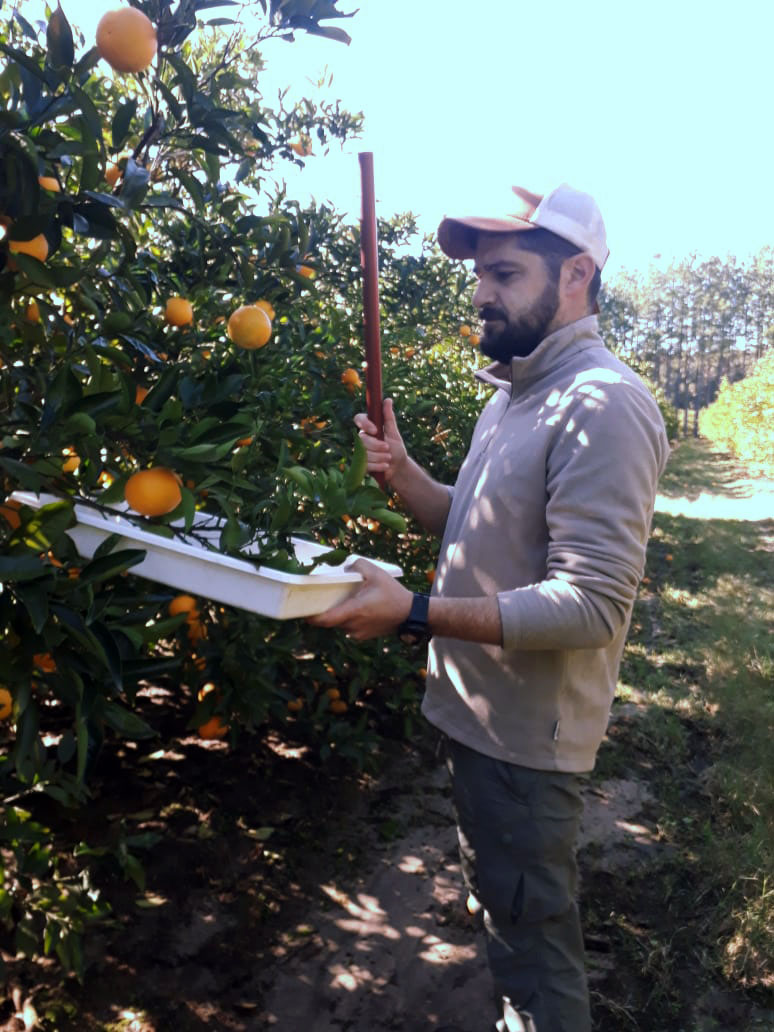 These results were obtained after working with comparative data in two IPM implementation campaigns (2020 and 2021) in a network of 13 pairs of lots located in family citrus farms in the aforementioned countries. Each pair of lots or project site has a demonstrator lot (LD) –with IPM– and a conventional lot (LC) –with traditional management– with a similar area, same species and citrus variety.

“The monitoring of the HLB vector and natural enemies is carried out periodically –every 15 days or once a month, depending on the season– through application of 3 methods: visual observation of outbreaks, adhesive cards and tapping of branches, which allows to improve the possibilities of detection”, expressed Giancola.

The first two experiences of mass release of the Tamarixia radiata wasp –specific parasitoid of the HLB vector– were also carried out in project lots and commercial lots in the region, from the massive rearing of this natural enemy, which is carried out in the INTA Agricultural Experimental Station in Bella Vista –Corrientes, Argentina–, within the framework of the agreement: INTA-FONDAGRO, and in the National Institute of Agrarian Innovation (INIA) Salto –Uruguay–, within the framework of the agreement: INIA-UPEFRUY- MGAP.

More than one hundred researchers and extensionists from the following institutions take active part in the project : INTA and Fundación ArgenINTA as implementing agency; INIA –Uruguay–, National University of Itapuá/University Foundation of Itapúa –Paraguay– and Autonomous Municipal Government of Bermejo –Bolivia–, as co-implementers agencies; the National Service for Agrifood Health and Quality (Senasa) and the Argentine Citrus Federation (Federcitrus), both from Argentina, and the Union of Fruit Producers and Exporters of Uruguay (Upefruy), as associated bodies.

The study began in 2019 and will run until the beginning of 2024. Its main goal is to adapt, disseminate and raise awareness of Integrated Pest Management technology in control of the citrus HLB vector in family citrus farming in the countries involved, for which demonstration lots function as territorial units in order to scale up of sustainable management of insect vector and prevention of HLB.

Fontagro is a unique sustainable co-financing mechanism for agricultural technology development in Latin America, the Caribbean and Spain and establishes a forum for priority issues solving regarding technological innovation. Its initiatives encourage investment in research, development and innovation in the agri-food sector through the creation of public-private institutional ecosystems in the format of regional platforms in more than two countries.