During the Twenty-First Annual Meeting of FONTAGRO’s Board of Directors in Chile, the positions of president and vice president were renewed. 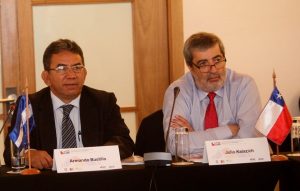 (La Serena, Chile, October 28, 2017) During the Twenty-First Annual Meeting of FONTAGRO’s Board of Directors, held in La Serena, Chile, representatives of 14 member countries elected Honduras and Chile to a second term, as president and vice president, respectively.

Mr. Armando Bustillo Castellanos, a Honduran national who was FONTAGRO’s president from 2016 to 2017, was reelected president of FONTAGRO for the coming period ending in October 2018.

Mr. Bustillo is an agricultural engineer, graduated from Honduras’ Universidad Nacional Autónoma. He is the Deputy Executive Director of Agricultural Technology Generation and Transfer at the Dirección de Ciencia y Tecnología Agropecuaria (DICTA) bureau of Honduras’ Ministry of Agriculture and Livestock. He is also the national representative before the Governing Body of Plant Genetic Resources worldwide.

Mr. Julio Kalazich Barassi, a Chilean national, was reelected vice president for the same period. Mr. Kalazich is an agricultural engineer, graduated from Universidad Austral de Chile, and he holds a PhD in plant genetics from Cornell University, United States. He is the National Director of the Agricultural Research Institute (INIA), under Chile’s Ministry of Agriculture.

Lastly, FONTAGRO’s reelected president underscored that “this opportunity given by FONTAGRO’s country members to continue as president will allow him to continue the task of adding new members and alliances with other international organizations and initiatives”.

The board thanked Dr. Hugo Li Pun, who is completing his second term as Executive Secretary.

For more information, you may email your queries to  fontagro@iadb.org

FONTAGRO is a unique regional cooperation mechanism that promotes family agriculture, competitiveness, and food security. It was established in 1998 and it includes fifteen member countries that have contributed a capital of some $100 million. FONTAGRO is sponsored by the Inter-American Development Bank (IDB) and the Inter-American Institute for Cooperation on Agriculture (IICA). Its Technical Administrative Secretariat is based at IDB headquarters in Washington, D.C. FONTAGRO has cofinanced more than 133 projects and initiatives in its member countries for an approximate amount of $105.5 million, including contributions from other sources of funding and executing agencies. Its member countries are Argentina, Bolivia, Chile, Colombia, Costa Rica, Dominican Republic, Ecuador, Honduras, Nicaragua, Panama, Paraguay, Peru, Spain, Uruguay, and Venezuela.