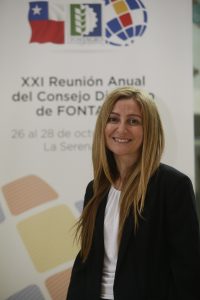 (La Serena, Chile, October 26, 2017) Today FONTAGRO elected Dr. Eugenia Saini, as its new Executive Secretary. The election was held in La Serena, Chile, during the Twenty-first Annual Meeting of the Board of Directors of FONTAGRO, a regional cooperation mechanism, in which representatives of more than 15 countries meet to discuss issues and investments regarding agricultural research and innovation. This year the Annual Meeting was hosted by Chile’s Agricultural Research Institute.

Dr. Eugenia Saini has been FONTAGRO’s administrator since 2014. Over the past nineteen years she has worked in public and private organizations in Latin America and the Caribbean, on strategic planning and management of innovation projects in agribusiness, agricultural policy, and rural development. Dr. Saini is an agricultural engineer and she holds a Master’s degree in Agribusiness and Food and a doctorate in Agricultural Science from Universidad de Buenos Aires. She also studied public accounting and administration at Universidad Argentina de la Empresa (UADE), as well as took other courses at Johns Hopkins’ Department of Economics, agrifood logistics at Zaragoza’s IAMZ, and project management at American Management Association. She has taught in several institutions and published papers with co-authors at INTA, CIAT, IFPRI and, FAO, among others. Dr. Saini was awarded a Fulbright scholarship at Cornell University, Hubert H. Humphrey Fellow, where she specialized in economics applied to agricultural policy. She is a member of the commission of former Fulbright scholars of Argentina.

The new Executive Secretary of FONTAGRO’s Technical Administrative Secretariat is the first woman to hold this position in FONTAGRO’s almost-twenty-year-long history. She will be in office for the next three years, from 2018 starting on January 1st, during which FONTAGRO will develop its next 2021-2025 Medium-Term Plan.

Mr. Armando Bustillo, President of FONTAGRO, stated that “the process was democratic and participatory. The Board  prioritized the candidate’s experience and knowledge, acquired during her years as FONTAGRO’s administrator. The candidate gave a presentation that emphasized the possibility of acquiring new members and organizations that can strengthen and share FONTAGRO’s mission and vision over the coming years.” The Board thanked Dr. Hugo Li Pun, who is completing his second term as Executive Secretary.

FONTAGRO is a unique regional cooperation mechanism that promotes family agriculture, competitiveness, and food security. It was established in 1998 and it includes fifteen member countries that have contributed a capital of some $100 million. FONTAGRO is sponsored by the Inter-American Development Bank (IDB) and the Inter-American Institute for Cooperation on Agriculture (IICA). Its Technical Administrative Secretariat is based at IDB headquarters in Washington, D.C. FONTAGRO has cofinanced more than 120 projects and initiatives in its member countries for an approximate amount of $98.4 million, including contributions from other sources of funding and executing agencies. Its member countries are Argentina, Bolivia, Chile, Colombia, Costa Rica, Dominican Republic, Ecuador, Honduras, Nicaragua, Panama, Paraguay, Peru, Spain, Uruguay, and Venezuela.