FONTAGRO participates in science and innovation forum organized by FAO

October 18, 2022-. Under the title: “How can science and innovation contribute to sustainable livestock farming in Latin America and the Caribbean?”, the side event organized by the Food and Agriculture Organization of the United Nations (FAO), took place in framework of the World Food Forum, being held this week in Rome, Italy, having Dr. Eugenia Saini, Executive Secretary of FONTAGRO as a representative for the institution. 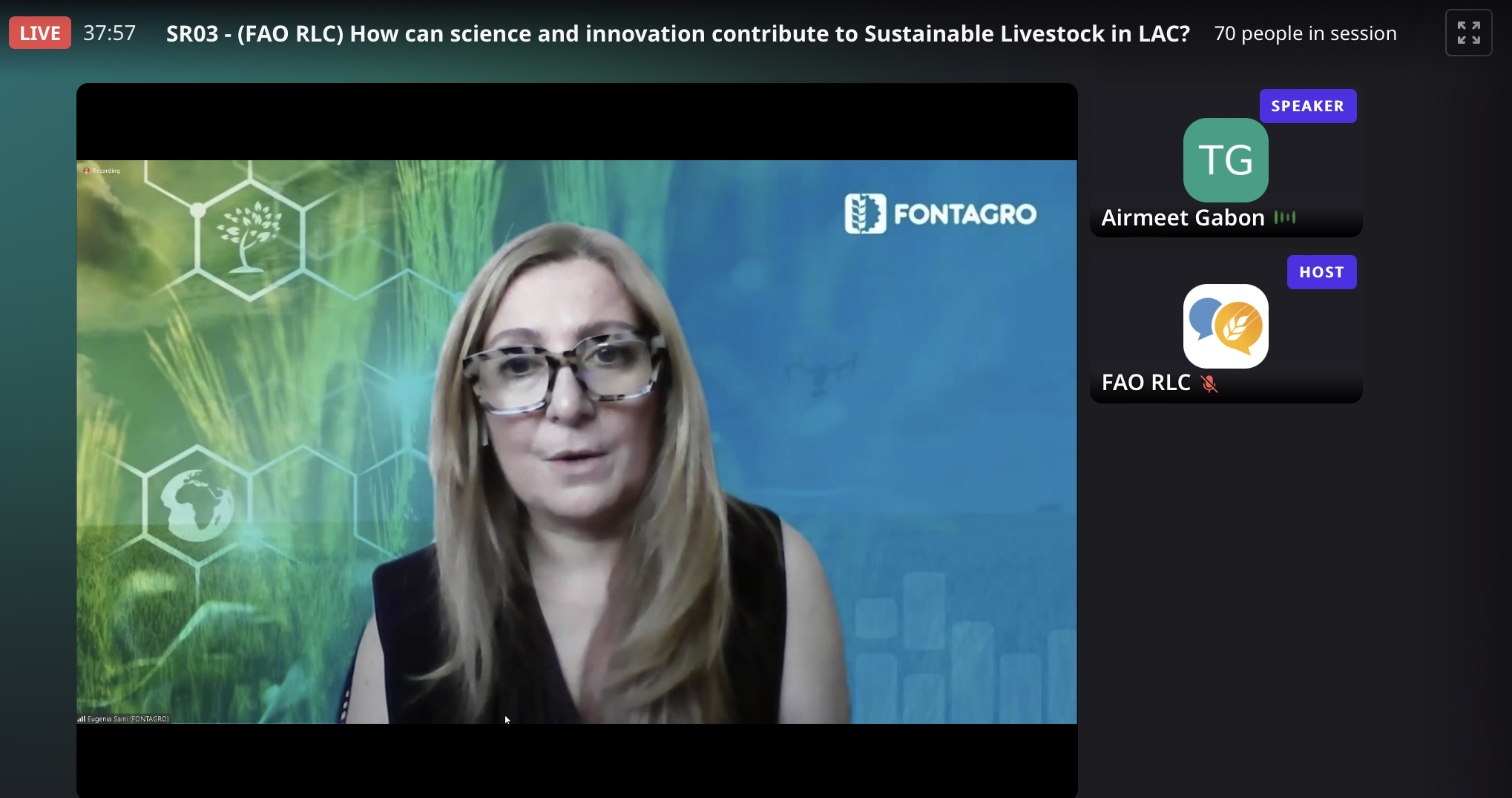 Saini participated as a panelist along with Pedro Amaral, Sustainability Director of Mars, Petcare, and Co-chair of the Meat Working Group of the Forest Positive Coalition of Action of the Consumer Goods Forum (CGF); Jacobo Arango, scientific expert of the Consultative Group on International Agricultural Research (CGIAR) and Ignacio Briones, Senior Livestock Specialist at the Fundación para la Innovación Agraria (FIA) Chile.

In Latin America and the Caribbean, livestock production plays a key role as a source of food, contributing to the food and nutritional security of the population, as well as being an important economic engine for the countries of the region, a point that was highlighted in the opening remarks made by Mario Lubetkin, FAO Assistant Director-General and Regional Representative for Latin America and the Caribbean, as well as by Mr. Fernando Mattos, Minister of Livestock, Agriculture and Fisheries of Uruguay and President of the Commission on Livestock Development for LAC (CODEGALAC).

Mr. Saini emphasized FONTAGRO’s role as an entity that generates scientific research that contributes to transforming the conception of agrifood systems as a problem and begin to see it as part of the solution. Sustainable livestock management requires four key pillars of work: genetics, animal health, feeding and management. Within these pillars, FONTAGRO’s projects have generated knowledge and technologies related to the improvement of seeds of forage species, adapted to adverse climatic and abiotic conditions, genetic editing of animals, herd management based on improvements in the use of natural forage biomass and silvopastoral systems. However, in the last 10 years, FONTAGRO together with the New Zealand Government, through the Ministry of Primary Industries (MPI) and the Global Research Alliance (GRA) have co-financed a large number of projects that demonstrate how livestock farming can be carbon neutral.

“FONTAGRO has a vision of sustainable, environmentally friendly livestock farming and in this sense, efforts have been focused on the creation of networks of scientists to carry out collaborative science.  For example, we are participating in research on organic carbon sequestration as a climate solution, a viable option to mitigate greenhouse gas (GHG) emissions and increase the resilience of these systems,” Saini said.

This initiative is linked to the project “Opportunities for soil carbon sequestration in Latin America and the Caribbean”, funded by FONTAGRO and MPI. It was approved in October 2021 and is being implemented in Argentina, Chile, Colombia, Costa Rica and Uruguay, with the National Agricultural Research Institute of Uruguay as the executing agency.

She also highlighted FONTAGRO’s participation in the project on satellite monitoring of the quantity and quality of biomass available in pastoral livestock systems, which seeks to benefit livestock producers in pastoral systems in Argentina, Uruguay, Colombia and Costa Rica, who will have information that will enable them to improve grazing management decisions and therefore forage harvesting and the profitability of their systems. It will also enable government entities to quantify more accurately the magnitude and intensity of GHG emissions and thus monitor, report and verify the effectiveness of national mitigation policies.

The event served to share experiences, scientific alternatives and technological and institutional innovations for a more resilient, sustainable, inclusive and competitive livestock production, revealing the importance of livestock as part of the solution to mitigate climate change, with the aim of supporting countries to make decisions based on scientific evidence, establish agreements, actions and a roadmap to contribute to the work on sustainable livestock that is developed within the framework of the Commission on Livestock Development for Latin America and the Caribbean (CODEGALAC).

During the week, Dr. Saini will participate in various activities organized by the World Food Forum, sharing the results obtained by FONTAGRO, as well as seeking to strengthen alliances with strategic partners in the region and the world, working to strengthen agrifood systems.

FONTAGRO was created 1998 with the purpose of promoting the increase of the competitiveness of the agri-food sector, ensuring the sustainable management of natural resources and the reduction of poverty in the region. The objective of FONTAGRO is to establish itself as a sustainable financing mechanism for the development of agricultural technology and innovation in Latin America and the Caribbean and Spain, and to establish a forum for the discussion of priority topics of technological innovation. The member countries are: Argentina, Bolivia, Chile, Colombia, Costa Rica, Ecuador, Spain, Honduras, Nicaragua, Panama, Paraguay, Peru, Dominican Republic, Uruguay and Venezuela. In the last 21 years 167 regional agricultural innovation platforms have been co-financed for an amount of US $ 124 million, which has reached 452 institutions and 33 countries worldwide.