During the mission, DICTA and IHCAFE signed an agreement aimed at carrying out a regional project to combat coffee berry borer insects. 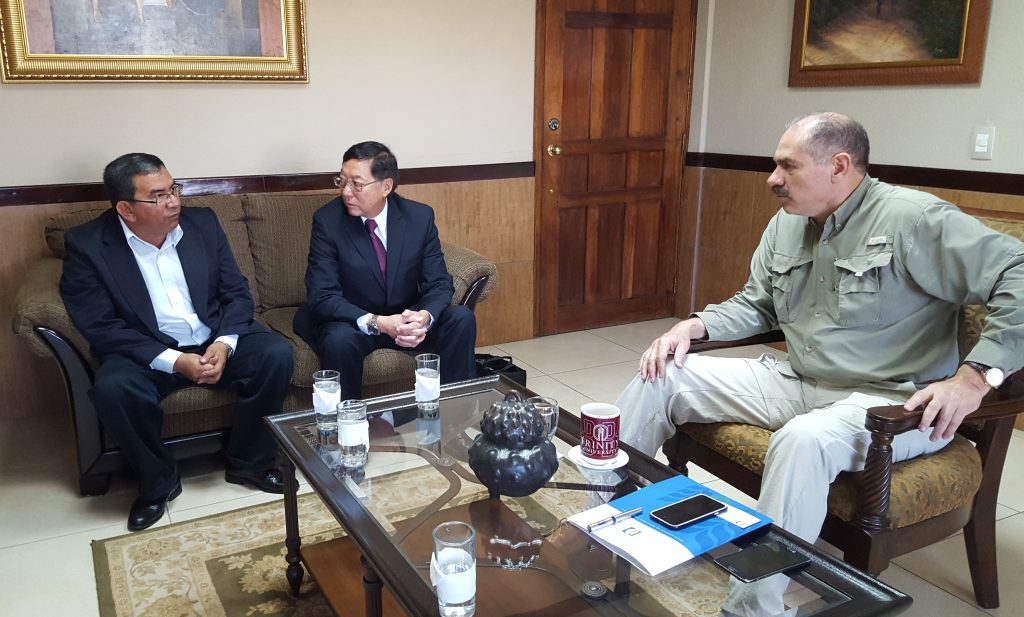 (Tegucigalpa, February 12, 2017) Officials from FONTAGRO, a cooperation mechanism among countries for the innovation of farming in Latin America and the Caribbean (LAC), carried out a mission to Honduras aimed at organizing capacity-building activities and several technical meetings at a regional level with the Dirección de Ciencia y Tecnología Agropecuaria (DICTA) bureau of Honduras’ Ministry of Agriculture and Livestock (SAG, for its acronym in Spanish).

Government Officials
One of the main activities carried out during the mission was a meeting with Engineer Jacobo Paz Boden, Honduras’s Minister of Agriculture, in which attendees analyzed opportunities for cooperation with countries in the region on priority issues regarding the development of family agriculture.

FONTAGRO and DICTA representatives also met with Mr. Luis Mata, Presidential Delegate Minister for Investment, who underscored the government’s support for FONTAGRO’s activities in Honduras, as well as their alignment with the priorities set forth in the Honduras 2020 plan.
Agreement with IHCAFE
DICTA, represented by Engineer Armando Bustillo, signed an agreement with the Instituto Hondureño del Café (IHCAFE) coffee institute, represented by Mr. Asterio Reyes Hernández, Chairman of its Board of Directors. The agreement is aimed at carrying out a regional project in Honduras, Panama, and Nicaragua to design strategies for managing the coffee berry borer and other diseases present in lowland coffee that have been exacerbated by climate change, especially on Honduran farms.

Project Monitoring Workshop
The mission included a coordination meeting with the Inter-American Institute for Cooperation on Agriculture (IICA) representative in Honduras, Gustavo Cárdenas Bejarano, PhD. Attendees agreed to work together to organize the 12th Workshop on Technical Monitoring of FONTAGRO Projects, which will be held in Honduras from June 19 to 23, 2017. Leaders of research and innovation projects supported by FONTAGRO from more than 15 countries are expected to participate in the workshop.
FONTAGRO officials also met with Universidad Zamorano officials, including its Rector and Dean, as well as the team led by Julio López Montes, PhD, Head of the university’s Innovation Center for Vegetables and Fruits, to coordinate the participation of FONTAGRO experts in the first International Family Agriculture Conference, which is scheduled to take place in Tegucigalpa in June.

FONTAGRO officials also visited the facilities of the innovation center so as to learn about low-cost technologies that rural families use for producing vegetables.

In-person Course in Honduras Aimed at Project Drafting
Within the framework of the mission, the facilities of DICTA’s Centro de Educación para el Desarrollo Agrícola, located in the department of Comayagua, were visited. The visit was aimed at planning an in-person training course for drafting competitive proposals, directed toward Honduran technical and science professionals who are in charge of developing agricultural innovation research projects.

Lastly, FONTAGRO officials met with Mr. Rafael Millán, the Inter-American Development Bank’s Chief of Operations in Honduras, to coordinate joint activities during the workshop that will take place in June.

Toward the end of the mission, Engineer Bustillo, President of FONTAGRO, highlighted how important it is that Honduras hold FONTAGRO’s presidency for the first time. He also welcomed the opportunity to have hosted members of FONTAGRO’s Board of Directors and its network of project researchers, who went to the country to share their experiences and results, as well as learn the challenges that family agriculture entails in Honduras.

****
ABOUT FONTAGRO
FONTAGRO is a unique regional cooperation mechanism that promotes family farming innovation, competitiveness, and food security. It was established in 1998 and it includes fifteen member countries that have contributed a capital of some $100 million. FONTAGRO is sponsored by the Inter-American Development Bank (IDB) and the Inter-American Institute for Cooperation on Agriculture (IICA). Its Technical Administrative Secretariat is based at IDB headquarters in Washington, D.C. FONTAGRO has cofinanced more than 100 projects and initiatives in its member countries for an approximate amount of $88.7 million, including contributions from other sources of funding and executing agencies. Its member countries are Argentina, Bolivia, Chile, Colombia, Costa Rica, Dominican Republic, Ecuador, Honduras, Nicaragua, Panama, Paraguay, Peru, Spain, Uruguay, and Venezuela.