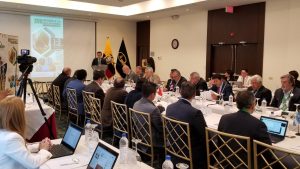 (Buenos Aires, October 2, 2018). The 17th Ibero-American INIA System Meeting took place on October 1-3 in Guayaquil, Ecuador, where earlier the XXII Annual Meeting of the Board of Directors of FONTAGRO had been held. During the meeting, representatives of more than 20 countries came together to discuss matters related to governance and the sustainability of agricultural research and innovation institutes, as well as cooperation mechanisms in Latin America and Europe.

The meeting was organized by Spain’s National Institute for Agricultural and Food Research and Technology and hosted by the National Institute for Agricultural Research of Ecuador. In attendance were representatives of Bolivia, Chile, Costa Rica, Colombia, Dominican Republic, Ecuador, Honduras, Nicaragua, Panama, Paraguay, Peru, Portugal, Spain, and Uruguay, alongside special guests from Brazil, El Salvador, and Mexico.

The main topics and priorities for the countries addressed during the meeting were the challenges associated with agricultural research and innovation and the state of the art in terms of governance in these institutions, as well as their strategic plans and strengths. Additionally, a mapping of the research and prospective topics and sustainability indicators for food, forest, and livestock production was presented.

During the meeting, the institutions’ authorities visited Hacienda Victoria, a successful model of a public-private partnership. Hacienda Victoria exports high quality and aroma cacao and there, the group learned about the different processes in the value chain of a private farm using varieties from Ecuador’s INIAP.

In addition, representatives of CIAT, CIMMYT, and FONTAGRO gave presentations about governance in their institutions.

Representing FONTAGRO at the meeting were its President, Guillermo Cerritos Joya, from Honduras, and its Executive Secretary, Dr. Eugenia Saini.

The National Institute for Agricultural and Food Research and Technology is an autonomous public research agency under the Secretariat for Research, Development, and Innovation of the Ministry of Economy and Competitiveness. It was created in 1971 as a result of the merger of different Spanish general government administration agencies involved in agriculture, livestock, and forestry.

FONTAGRO is a sustainable co-financing mechanism that promotes research, development, and innovation in agriculture in Latin America and the Caribbean. It was established in 1998 and is comprised of 15 member states that have contributed approximately US$100 million in capital. FONTAGRO is sponsored by the Inter-American Development Bank (IDB) and the Inter-American Institute for Cooperation on Agriculture (IICA). Its Technical and Administrative Secretariat is based at IDB headquarters in Washington, D.C. FONTAGRO has co-financed more than 100 projects and initiatives for its member countries in the amount of nearly US$88.7 million, including contributions from other funders and executing agencies. The countries that make up FONTAGRO are Argentina, Bolivia, Chile, Colombia, Costa Rica, Dominican Republic, Ecuador, Honduras, Nicaragua, Panama, Paraguay, Peru, Spain, Uruguay, and Venezuela.