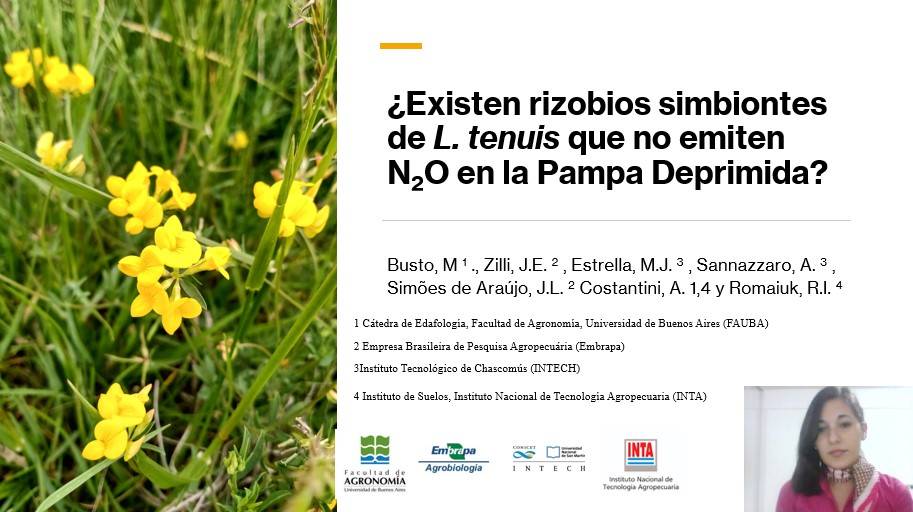 On June 3 and 4, the X Conference of Young Researchers organized by the Faculty of Veterinary Sciences of the University of Buenos Aires was held. In it, Lic. Mercedes Busto presented the first results related to her doctoral studies financed with funds from this project.

You can access the video of the presentation here.

Are there symbiotic rhizobia of L. tenuis that do not emit N2O in the Depressed Pampa?

The Flooding Pampa is one of the main regions of the country destined to the production of fodder for the fattening of grazing cattle. This region is characterized by the predominance of hydrohalomorphic soils that limit plant growth. To increase the net primary productivity and the quality of the pastures in these soils, mixed grasses with Lotus tenuis are used, due to the ability of this legume to thrive in edaphic environments affected by excess salts and water, its optimal nutritional characteristics and its ability. to interact with bacteria that carry out the process of biological nitrogen fixation (BNF). In these systems, direct N2O emissions can be generated from the nodules of legume species and indirect from the soil, through the denitrification process. Bacteria of the genus Rhizobium, responsible for nodulation and the BNF process, can also generate losses of N as N2O (direct emissions). This will depend on the complete set of genes that code for the enzymes involved in denitrification and their ability to express these genes in different edaphic environments. Since N2O is one of the main greenhouse gases, mitigating its emissions contributes to sustainable livestock production. That is why the present work aimed to characterize the pool of genes related to the denitrification process in strains of symbiont rhizobia of L. tenuis, for its potential use in seed inoculants of said legume. Rhizobia strains with high capacity were selected to carry out the BNF process, isolated from soils of the Manantiales de Chascomús Experimental Integrated Farm, Buenos Aires province (35 ° 44 ’52 .44 ’’ S; 58 ° 02 ’56 .48 W). The genomes of Mesorhizobium sanjuanii BSA136 and Mesorhizobium intechi BD68 were sequenced by in silico analysis. Both strains were found to possess only three genes associated with the denitrification pathway (NnrA, NirV, and NirK). Of these, only NirK is essential in the denitrification process since it encodes the enzyme nitrite reductase (reduces NO2- to NO), it lacks the genes NapA and NorC, which encode the enzymes nitrate reductase (which reduce NO3- to NO2-) and nitric oxide reductase (which reduces NO to N2O), respectively. That is why these strains do not have the ability to emit N2O and, therefore, can be used in L. tenuis seed inoculants. Its use could contribute to the production of sustainable pastures, ensuring the obtaining of large N inputs to the system through the FBN and mitigating the direct emission of N2O from rhizobia strains.

Winter biomass of pastures with Lotus tenuis in the Flooding Pampa

Activities carried out by INIA Uruguay in 2021

Sampling of N2O emissions and NH3 volatilization in Chile

Preparation of lots for sampling associated with biological nitrogen fixation

Progress in the study of greenhouse gas emissions in Chile

Presentation of the project at the Fontagro Knowledge Week

Selection of study sites and soil samplings in Chascomús

Disclosure of the project in the Valor Carne digital newsletter

Project Ph.D. fellow performs a research stay in the UK