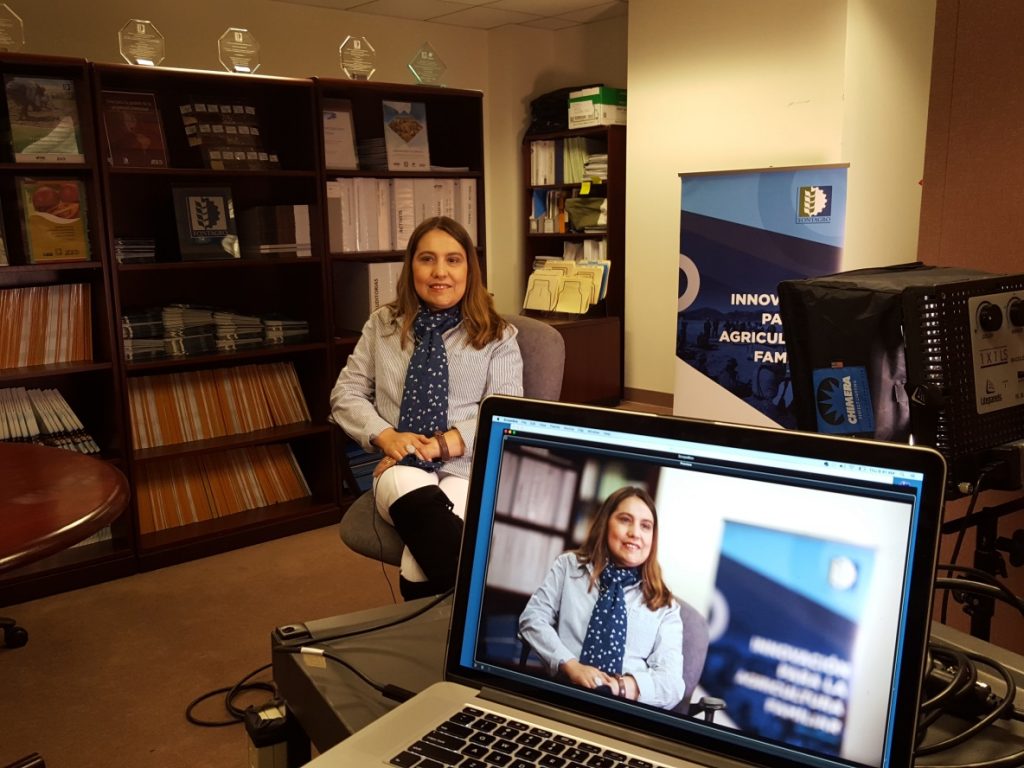 Maria Teresa Pino visited FONTAGRO. The researcher, who obtained our Excellence Award 2014, is the coordinator of the National Food Program for INIA Chile.

Washington DC, December 8, 2016.– On December 7, 2015, Dr. Maria Teresa Pino, Coordinator of the National Food Program for INIA Chile (National Institute of Agricultural Technology), who also led a FONTAGRO’s project under the title: “How to increase competitiveness in potato and wheat production systems in South America in the age of climate change”, participated as a panelist in a round table called “From domestic consumption to exports”, organized by the Climate Change Division and the Environment, Rural Development and Disaster Risk Management Division of the Inter-American Development Bank (IDB).

In the same round table, Dr. Álvaro Gaitán, from CENICAFE Colombia (National Center for Coffee Growing Research), leader of another FONTAGRO’s project called “Development and implementation of advanced genomic tools to contribute to climate change adaptation in coffee growing.”, participated virtually.
The projects showed the adaptations introduced to face the impact of climate change on wheat, potato and coffee, especially at times of drought and high temperatures.

Leading researcher
Dr. Maria Teresa Pino’s project won the FONTAGRO 2014 Excellence Award (Premio a la Excelencia FONTAGRO 2014). When she participated in the abovementioned round table, Dr. Pino visited FONTAGRO’s offices and we took the opportunity to interview her.
The main purpose of the project was to generate a platform for cooperation among countries (Chile, Uruguay and the CIP –International Potato Center in Peru) in order to identify materials that can be adapted to climate change, both for the production of wheat and potato.

During the interview, Dr. Pino shared concepts that were key to the success of the project, such as the importance of cooperation with other countries in the region, which led to strengthening the scientific exchanges among countries and to the involvement of countries that initially did not participate in the consortium, such as Ecuador. It also enabled players to enhance researcher skills in state-of-the-art technologies.

Outcomes and dissemination
Dr. Pino also shared some of the project’s outcomes and highlighted the fact that human resources training was a very relevant aspect, since more than 20 papers were drafted during the execution of the project. She added that even today -3 years after the project’s completion-, new researchers have obtained their doctoral and master degrees in agricultural sciences and molecular biology, as a result of this project.
Regarding dissemination of the outcomes, she pointed out that three types of activities that were implemented greatly contributed to the project. A website was built to enable researchers to massively contact professionals in other countries. Field events were organized, with the participation of more than 600 farmers to verify how the enhanced varieties adapted to drought, with and without irrigation. Finally, news bulletins were issued to communicate the progress in a simple and easy to understand language, as well as high impact scientific papers were published in internationally recognized scientific journals such as Plant Science or Plant Journal. Dr. Pino summarized this point by saying that these materials covered the whole range of publications, from the ones closest to farmers to the ones with more scientific content.

To see the whole interview, watch the video below (Spanish version only):

****
About FONTAGRO
FONTAGRO is a unique regional cooperation mechanism that promotes family farming innovation, competitiveness, and food security. It was established in 1998 and it includes fifteen member countries that have contributed a capital of some $100 million. FONTAGRO is sponsored by the Inter-American Development Bank (IDB) and the Inter-American Institute for Cooperation on Agriculture (IICA). Its Technical Administrative Secretariat is based at IDB headquarters in Washington, D.C. FONTAGRO has co-financed more than 100 projects and initiatives in its member countries for an approximate amount of $88.7 million, including contributions from other sources of funding and executing agencies. Its member countries are Argentina, Bolivia, Chile, Colombia, Costa Rica, Dominican Republic, Ecuador, Honduras, Nicaragua, Panama, Paraguay, Peru, Spain, Uruguay, and Venezuela.