Washington D.C., 2 October 2017 (IICA). On September 22, 2017, IICA´s Delegations of Canada, Mexico and United States, in collaboration with IICA´s Flagship project on “Competitiveness and sustainability of agricultural chains”, hosted a dialogue on the future of agri-food trade in the Northern region. 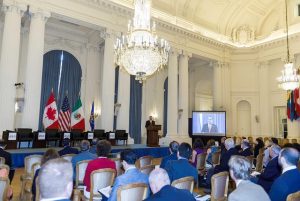 This dialogue served to analyze the challenges and opportunities for agricultural trade among the three countries in order to strengthen the competitiveness of the region, promote the development of a more inclusive and responsible trade and to continue to create certainty for trade and investment in the agricultural sector in the Northern region of the Americas.
To achieve these goals, representatives from producer’s organization and industry from Canada, Mexico and United States, together with experts from international organizations, analyzed the impact that NAFTA has had in agricultural trade and integration in the region during the last 24 years. Additionally, challenges were discussed and recommendations were made that aimed to strengthen agricultural trade among the three countries.
All the participants agreed that NAFTA has been a good agreement for the agricultural sector of the three countries and that it would be in their best interest to continue to move forward to strengthen this integration. It was also recognized that there is a need to modernize the agreement as this was signed 24 years ago, however all the participants agreed that this modernization should have the “make no harm” principle as its basis. 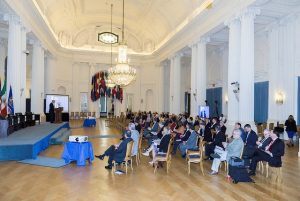 IICA’s Representative in the USA, Dr. Miguel García-Winder shared insight into the importance of this topic. Credit: Juan Manuel Herrera/OAS

Participants identified some common areas that, in their view, need to be addressed to achieve greater integration and greater benefits for consumers in the region. Some of these areas include the need to continue to work on trade facilitation processes, in efforts to set common food safety measures, strengthen the capacity for farmers and industry of the three countries to respond to market signals, increase efforts to facilitate trade and investments and, overall, ensure that all measures are based on sound scientific principles and merit. An area of particular concern to several of the participants was the need to prevent and protect previous investments and to continue to work on issues related to intellectual property rights, improve transparency in SPS measures, achieve regulatory coherence and continue to streamline dispute remedies.
From the event, it was clear that trade in agriculture goes beyond the amount of dollars traded between the three countries. Every dollar and pound of food traded represents the efforts of millions of workers along the agricultural value chains. The agricultural trade in the region has also contributed to improve the health and wellbeing of the societies of the three countries.