The meeting was held in La Ceiba and researchers from more than 16 countries in Latin America and the Caribbean participated. 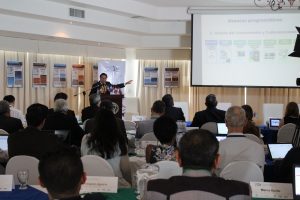 (La Ceiba, Honduras, June 24, 2017) From June 20 to 23, the 12th Workshop on Technical Monitoring of FONTAGRO Projects was held in La Ceiba, Honduras. During the workshop, participants analyzed innovations generated by projects on family agriculture’s adaptation to and mitigation of climate change, which have been developed by organizations in the region.

INNOVATIONS
Scientists from more than 16 countries met with authorities from national agricultural research and innovation institutes to analyze progress made by over 20 ongoing projects.

Two of the projects have been implementing the sustainable intensification of rice systems, thus reducing the use of seeds and water, and increasing crop productivity in five countries.

A cacao project developed techniques to prevent losses due to badly dried beans and obtain a high-quality product. Other technologies under development are aimed at combating pests that affect the region’s coffee sector, such as coffee rust and coffee berry borers.

In addition, ongoing projects in the Dry Corridor area of Central America include biointensive farming and technologies aimed at helping farmers adapt to climate change.

The results of a project on the recovery of lost Andean crops with high nutritional value in Bolivia, Ecuador, and Chile are enabling farmers access to higher quality diets and improve agricultural productivity. Other Andean crops, such as commercial fruit trees, have been exploited in a comprehensive manner by introducing improvements throughout the value chain adding value and generating greater benefits.

Other projects, aimed at measuring and mitigating greenhouse gas emissions from livestock are promoting the use of improved pastures, better feeding, and generating proper emissions factors in each country. This will result in lower emissions to those published by the Intergovernmental Panel on Climate Change (IPCC) inventories.

Some of the projects that are cofinanced by FONTAGRO and organizations in the region are as follows:
• Diversified Coffee, Grain, and Banana Production, a Resilience Measure for Family Agriculture in Nicaragua
• #FONTAGROProject: Biointensive Farming for Rural Families in Central America’s Dry Corridor (in Spanish)
• Video about FONTAGRO’s Project on Andean Commercial Fruit Trees (in Spanish)

SECOND SYMPOSIUM ON ADAPTATION TO CLIMATE CHANGE
The Second Symposium on Family Agriculture Adaptation to Climate Change was carried out within the framework of the workshop. Experts on the subject participated in the symposium, including Mr. Ricardo Sánchez López, Colombia’s former Deputy Minister of Agriculture and Rural Development. Roberto Quiroz, PhD, Research Scientist and Leader on Crop Systems Intensification and Climate Change at the International Potato Center (CIP), gave a lecture on experiences of adaptation to climate change.

Both experts agreed on the challenges the region faces in terms of climate change, as well as the need for revaluing traditional knowledge and for countries to have climate policies in place. 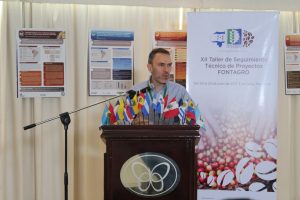 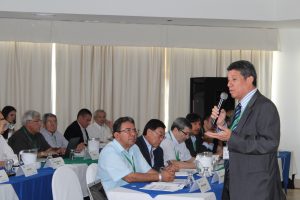 Progress and results of ongoing projects that have been cofinanced by FONTAGRO and the Global Environment Facility (GEF) were also presented.

Within the context of the workshop, FONTAGRO’s Regional Agricultural Communications Network was launched and its first meeting was held. The objective of the network is to bring together researchers and professionals with communications specialists from research institutes, so they may share best practices and experiences for disseminating project results. At its first meeting, the network identified topics of common interest for the development of a regional communications plan.

A technical tour was carried out during the meeting. It included a visit to Fundación Hondureña de Investigación Agrícola’s facilities, in Pico Bonito National Park, in the Cuero River Basin. Cacao and agroforestry programs are being carried out to generate, validate, and transfer technologies. Lastly, a visit to Lancetilla Botanical Garden, known as “Honduras’ Green Treasure,” was carried out to learn about exotic trees and plants that have been collected for nearly 80 years from tropical areas around the world. 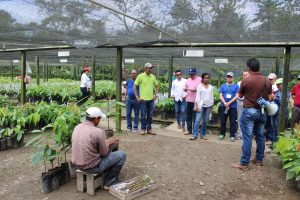 Ongoing projects that will conclude this year competed for FONTAGRO’s Seventh Scientific Excellence Award, 2017, during the event. FONTAGRO presents this award to the best project and the team of researchers and organizations that have demonstrated their scientific excellence in the execution of the project’s activities. The following project was awarded the 2017 Award: “Platform to Consolidate Beekeeping as a Development Tool in Latin America and the Caribbean,” led by researcher Enrique Bedascarrasbure of Argentina’s National Agricultural Technology Institute (INTA), and implemented jointly with the following organizations: the Dominican Republic’s Agriculture and Forestry Research Institute (IDIAF), Costa Rica’s National Institute for Agricultural Innovation and Technology Transfer (INTA), and Uruguay’s National Agricultural Research Institute (INIA).

Engineer Armando Bustillo, President of FONTAGRO and Honduras’ DICTA Deputy Director of Technology Generation and Transfer, stated that: “as Hondurans, we are very happy to welcome to our land researchers from fellow nations, who are working to create innovations that guarantee the food security of farmers and their families, and improve their incomes.”

For more information on the meeting, email ccarrasco@iadb.org.

****
ABOUT FONTAGRO
FONTAGRO is a unique regional cooperation mechanism that promotes family agriculture, competitiveness, and food security. It was established in 1998 and it includes fifteen member countries that have contributed a capital of some $100 million. FONTAGRO is sponsored by the Inter-American Development Bank (IDB) and the Inter-American Institute for Cooperation on Agriculture (IICA). Its Technical Administrative Secretariat is based at IDB headquarters in Washington, D.C. FONTAGRO has cofinanced more than 100 projects and initiatives in its member countries for an approximate amount of $88.7 million, including contributions from other sources of funding and executing agencies. Its member countries are Argentina, Bolivia, Chile, Colombia, Costa Rica, Dominican Republic, Ecuador, Honduras, Nicaragua, Panama, Paraguay, Peru, Spain, Uruguay, and Venezuela.