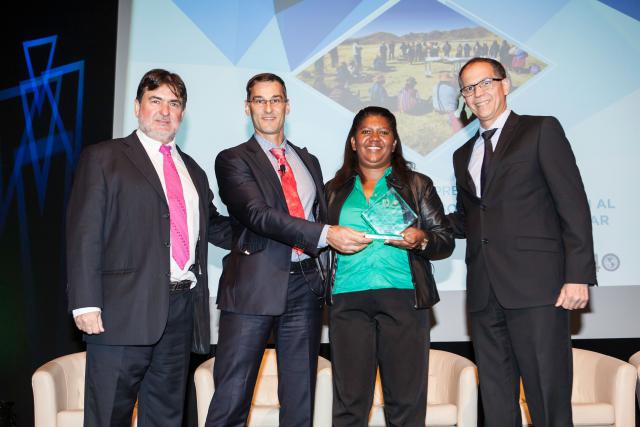 The “Impactful Innovations” publication was launched during the ceremony, and farmers shared their successes and failures in the fight against climate change.

(Washington, D.C., May 18, 2016) Yesterday FONTAGRO held the awards ceremony for the 2015 Contest for Successful Cases of “Innovation in Family Farming Adaptation to Climate Change.”

Authorities from the Inter-American Development Bank (IDB), the Inter-American Institute for Cooperation on Agriculture (IICA), and FONTAGRO’s Board of Directors, as well as officials from organizations headquartered in Washington, D.C., attended the event. A group of small family farmers, project coordinators, and researchers also traveled especially to share their life stories, their challenges, and their successes in the fight against climate change. During the ceremony, they narrated how creativity, effort, and coordination with NGOs and national and international organizations enabled the design of concrete solutions and many low-cost innovations, which helped small farmers become more resilient.

The publication
Moreover, with support from the Global Environment Facility (GEF) and its sponsors—the IDB and the IICA—FONTAGRO launched “Impacting Innovations. Lessons on family farming’s adaptation to climate change in Latin America and the Caribbean,” the publication that includes the contest’s winning and finalist cases and summarizes successful innovative experiences for adapting to climate change, as well as lessons learned from family farmers.

Innovations
The contest enabled us to find out about innovations developed by family farmers over the past 15 years, which can potentially be used in other regions of the world.

Some examples included climate-smart agriculture technologies adopted by farmers with the support of a partnership of organizations in Brazil’s semiarid region that, among others, enabled farmers to increase milk production from an average of 5 liters to an average of 12 liters per animal per day (140%).

There was also an ingenious irrigation method through rainwater harvesting in Nicaragua and Mexico. By installing water reservoirs for irrigation during drought, families were able to more than double annual yields of such grains as maize and rice, as well as beans, without the need to migrate to other locations.

The repopulation of native criollo goats contributed to their adaptation to such harsh conditions as snowfall and the fall of volcanic ash in the Argentine Patagonia. After nearly total losses of livestock, which compromised food security, nowadays goats cover 40% of household consumption. In addition, surplus is sold on the local market, thus increasing producers’ income.

Other examples include family participation towards fish farming in Bolivia or towards organic quinoa production and exports in the Peruvian Altiplano. The empowerment of women who decided to take risks and diversify in order to prosper also generated significant income for their families and nutrition improvements for their children.

Remarkable efforts involving training and knowledge dissemination helped strengthen the capacities of farmers and their families, and have enabled them to reduce their vulnerability to climate change.

National Organizations and Universities Category:
• Native Criollo Goats: from ‘Producing to Survive’ to ‘Producing to Live’ in the Argentine Patagonia.

FONTAGRO’s Board of Directors also decided to award an honorable, nonmonetary mention to recognize an innovative case on intensifying cattle farming systems in Costa Rica.

During the ceremony, the President of FONTAGRO, Luis Repetto, PhD, stated that “it’s all about discovering experiences and meeting the protagonists in order to understand all factors and involve more actors to create comprehensive solutions and adapt to climate change. Society’s internalization of scientific knowledge is key to working on innovative models and bringing tools to the most affected sectors, as is expanding this knowledge so most producers can have access to it.”

Awards
Winning cases received a $5,000 monetary award, to be distributed among case participants, as well as $10,000 to contribute to strengthening the institutional capacity of winning organizations.

The publication (in Spanish) can be downloaded from FONTAGRO’s website through the following link: IMPACTFUL INNOVATIONS.

Please email your queries to fontagro@iadb.org.
****
About Family Farming and Climate Change
According to the 2014 study, “Agriculture and Future Climate in Latin America and the Caribbean: Systemic Impacts and Potential Responses” published by the Inter-American Development Bank, the main changes in agriculture resulting from the impact of climate change in Latin America and the Caribbean are atmospheric and soil temperatures, decreases in top soil moisture, sea level rise, and CO2 fertilization. Agriculture is also affected by the intensification of climate events. From the first half of the 20th century to the first decade of the 21st century, the frequency of floods and droughts in the Americas increased twentyfold. Family farmers are the most affected by climate change, because they tend to work in precarious conditions and have limited access to technical, financial, and knowledge resources. In Latin America and the Caribbean, the family-farming sector includes 17 million small farms and accounts for 40% of total production. Many low-cost innovations can improve the yields of small agricultural holdings and help small producers become more resilient. Consequently, the increase in income generally enables farmers to have more resources for adapting to climate change.

About FONTAGRO
FONTAGRO is a unique regional cooperation mechanism that promotes family farming innovation, competitiveness, and food security. It was established in 1998 and it includes fifteen member countries that have contributed a capital of some $100 million. FONTAGRO is sponsored by the Inter-American Development Bank (IDB) and the Inter-American Institute for Cooperation on Agriculture (IICA). Its Technical Administrative Secretariat is based at IDB headquarters in Washington, D.C. FONTAGRO has cofinanced 108 projects and initiatives in its member countries for an approximate amount of $88.7 million, including contributions from other sources of funding and executing agencies. Its member countries are Argentina, Bolivia, Chile, Colombia, Costa Rica, Dominican Republic, Ecuador, Honduras, Nicaragua, Panama, Paraguay, Peru, Spain, Uruguay, and Venezuela.