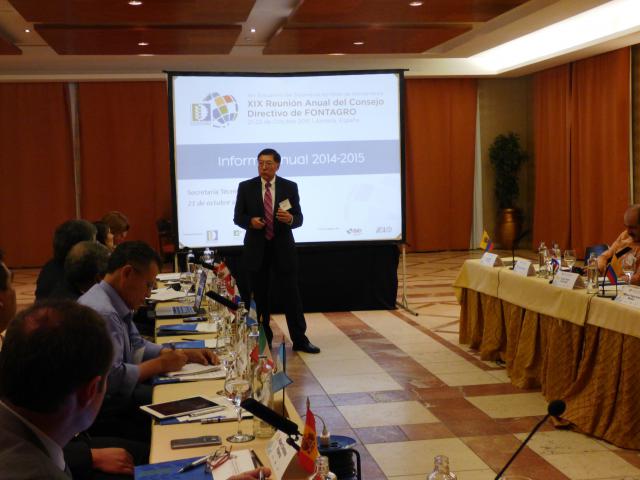 The meeting was held in Almería, in the context of the Fourteenth Ibero-American System Meeting of INIAs (national agricultural research and innovation institutes), during which intensive dairy and horticulture, beekeeping, and knowledge management projects were approved.

(Washington, D.C., October 23, 2015) On October 21 through 23 FONTAGRO’s Board of Directors held its Nineteenth Annual Meeting in Almería, Spain. The meeting was hosted by Spain’s National Institute of Agrarian and Agro-Food Technology, which had also hosted the Fourteenth Ibero-American INIA System Meeting, where representatives of more than 15 countries met to discuss several aspects of agricultural research and innovation.

The main issues addressed at the meeting were intensive horticulture and the cooperation of European institutions with Ibero-America; success stories from international projects were also shared. During the Meeting of FONTAGRO’s Board of Directors the 2015-2016 annual operating plan was also approved. The plan includes several program activities in family farming innovation, such as a project on the sustainable intensification of the dairy sector in at least 12 countries, a beekeeping and farming project in three countries in the Gran Chaco, and the development of new impact assessment and bioeconomy initiatives in intensive horticulture.

Knowledge management and capacity building were two of the main themes present in both meetings. During the meeting, AECID, Spain’s Agency for International Development Cooperation, under the Ministry of Foreign Affairs and Cooperation, introduced a new thematic community of knowledge related to the rural development and food security sector. In addition, FONTAGRO’s Board of Directors approved a knowledge management strategy that highlights the need to strengthen the dissemination of knowledge and information about the innovations that have been generated by projects supported by FONTAGRO, in order to secure their implementation in family farming in Latin America. The strategy also underscores the importance of contributing to strengthening the technological, institutional, and organizational capacities of national agricultural research and innovation institutes across member countries. The implementation of this initiative has the support of the Knowledge Partnership Korea Fund for Technology and Innovation, managed by the Inter-American Development Bank (IDB).

With representatives from Argentina, Chile, Costa Rica, Colombia, Dominican Republic, Ecuador, Honduras, Nicaragua, Panama, Paraguay, Peru, Spain, and Uruguay, and the participation of Guatemala and Mexico as special guests, the winning projects of the2015 Call for Proposals were approved, the 2016 Call for Proposals was launched, and several other issues were addressed.

The following representatives of FONTAGRO’s sponsors attended the meeting: Esther Rodríguez Fernández on behalf of the Inter-American Development Bank and Priscila Henríquez on behalf of the Inter-American Institute for Cooperation on Agriculture (IICA). Sponsors provide FONTAGRO with legal, technical, and strategic support for implementing operations and projects. Other FONTAGRO and IDB representatives also attended the meeting and made presentations through modern videoconference technologies from Washington, D.C., in the United States.

At the end of the meeting it was decided that Argentina would be the host country for the next meeting of the Board of Directors and Peru would host the Technical Project Monitoring Workshop.

The vice president of Uruguay’s National Agricultural Research Institute and president of FONTAGRO, José Luis Repetto, closed the event by stating: “FONTAGRO has had a very productive year and has established important partnerships that have enabled it to carry out new projects, improve its exposure, and strengthen knowledge management. Research institutions now recognize the strategic value of turning knowledge into a key asset that needs to be shared to generate a greater impact on society.”

The National Institute of Agrarian and Agro-Food Technology is an autonomous public research organization within Spain’s Secretariat of State for Research, Development, and Innovation of the Ministry of Economy and Competitiveness (MINECO). It was established in 1971 as a result of the merger of several of Spain’s general administration agencies, which operated within the scope of agriculture, livestock, and forestry.

FONTAGRO is a unique regional cooperation mechanism that promotes family farming innovation, competitiveness, and food security. It was established in 1998 and it includes fifteen member countries that have contributed a capital of some $100 million. FONTAGRO is sponsored by the Inter-American Development Bank and the Inter-American Institute for Cooperation on Agriculture. Its Technical Administrative Secretariat is based at IDB headquarters in Washington, D.C. FONTAGRO has cofinanced 98 projects and initiatives in its member countries for an approximate amount of $83.7 million, including contributions from other sources of funding and executing agencies. Its member countries are Argentina, Bolivia, Chile, Colombia, Costa Rica, Dominican Republic, Ecuador, Honduras, Nicaragua, Panama, Paraguay, Peru, Spain, Uruguay, and Venezuela.