The main topics discussed were the platform for the sustainable intensification of livestock production and cacao projects. 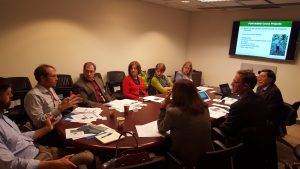 (Washington, D.C., May 12, 2017) In connection with the launch of the “Sustainable Livestock Production Platform last April, officials from the United States Department of Agriculture (USDA) and the United States Agency for International Development (USAID) visited FONTAGRO’s offices to learn about its livestock initiative and its cacao projects, as well as to discuss USDA’s projects on the subjects.

During the meeting, they expressed their interest in participating in the platform and agreed to help disseminate information on FONTAGRO’s initiatives regarding livestock production and greenhouse gas emissions, as well as to work together to identify future cooperation opportunities.

Representatives from USDA, USAID, IICA, and FONTAGRO attended the meeting.

FONTAGRO is a unique regional cooperation mechanism that promotes family farming innovation, competitiveness, and food security. It was established in 1998 and it includes fifteen member countries that have contributed a capital of some $100 million. FONTAGRO is sponsored by the Inter-American Development Bank (IDB) and the Inter-American Institute for Cooperation on Agriculture (IICA). Its Technical Administrative Secretariat is based at IDB headquarters in Washington, D.C. FONTAGRO has cofinanced more than 100 projects and initiatives in its member countries for an approximate amount of $88.7 million, including contributions from other sources of funding and executing agencies. Its member countries are Argentina, Bolivia, Chile, Colombia, Costa Rica, Dominican Republic, Ecuador, Honduras, Nicaragua, Panama, Paraguay, Peru, Spain, Uruguay, and Venezuela.