The event was held from June 4 to 8 at the headquarters of the Inter-American Development Bank and was attended by experts and leaders in agricultural innovation from more than 15 Latin American and Caribbean countries and Spain.

Photo: FONTAGRO. First discussion about the history of FONTAGRO’s founding and evolution.

(Washington, June 11, 2018). On June 4, 2018, the Inter-American Development Bank (IDB) in Washington, D.C. was host to the celebration of the twentieth anniversary of the founding of FONTAGRO, a unique financing mechanism for projects designed to bring innovation to family farming in Latin America, the Caribbean, and Spain.

Armando Bustillo, President of FONTAGRO, presided over the occasion alongside the event’s sponsors: the Inter-American Institute for Cooperation on Agriculture (IICA), represented by its Director General, Manuel Otero, and the IDB, represented by its President, Luís Alberto Moreno.

Over the course of the event, and via different panels, leaders and experts in agricultural financing, research, and innovation discussed the history and evolution of this cooperation mechanism. The conversations included an examination of FONTAGRO’s 20 years of governance in research and innovation in Latin America, the Caribbean, and Spain, the present and future of public and private financing for the sector, and the future agenda for agriculture, projecting out to 2050. (Click here for video)

The celebratory event wrapped up with the presentation of a commemorative publication: “FONTAGRO: 20 years supporting the innovation of family farming in Latin America, the Caribbean and Spain,” which can be found at the following link.

In the framework of the celebrations, the Third Symposium on Adapting Family Farming to Climate Change was held on June 5-6. The Symposium was supported by the IDB and the Global Environment Facility (GEF) and was held for the third consecutive year in the framework of the Thirteenth Workshop on the Technical Monitoring of FONTAGRO Projects. FONTAGRO, IDB, and IICA authorities, project lead scientists, and directors of national agricultural research institutions from the region, together with colleagues from the sector, met in the context of these events to examine the outcomes of and progress made in innovation projects co-financed by the mechanism. 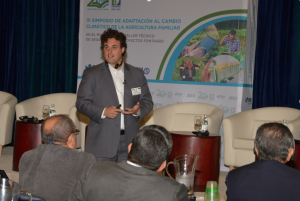 During the Thirteenth Workshop on the Technical Monitoring of FONTAGRO Projects, scientists from more than 15 Latin American and Caribbean countries met with authorities from national agricultural research and innovation institutions to examine the progress and results of 15 projects that spanned the following topics:

For more information about the above projects, click on the titles or click here. (Only available in Spanish)

The Thirteenth Workshop on the Technical Monitoring of FONTAGRO Projects put the finishing touch on the week’s events with a technical visit to the United States Department of Agriculture—specifically to the Beltsville Agricultural Research Center (USDA-ARS, BARC). During the visit, the Center’s authorities gave presentations about their national research programs and the group had the opportunity to tour the Adaptive Cropping Systems Lab, the Genetic Improvement of Fruits and Vegetables Lab, specifically strawberries, and the Sustainable Agricultural Systems Laboratory. In this regard, the vice president of FONTAGRO, Pedro Bustos, noted that, “on the ground he had the opportunity to learn about highly advanced research being done in priority areas for the country.” 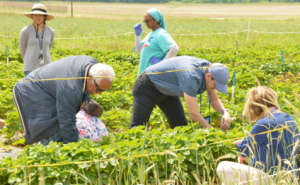 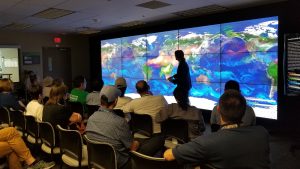 Also planned in the framework of the event was a visit to the facilities of the National Aeronautics and Space Administration, or NASA as it is better known. During this visit, representatives of GEOGLAM, a regional initiative of the Group on Earth Observations and Global Agricultural Monitoring established by the G20, gave a presentation on crop and grassland monitoring to generate data on food production at scale.

NINTH ANNUAL MEETING OF THE FONTAGRO BOARD OF DIRECTORS

The Ninth Annual Meeting of the FONTAGRO Board of Directors was also held and began with a panel that included Julie T. Katzman, Vice President of FONTAGRO, Juan Pablo Bonilla, Manager of the Climate Change and Sustainable Development Sector, Irene Arias Hofman, General Manager of the MIF, Federico Villarreal, IICA’s Director for Technical Cooperation, and Eugenia Saini, the FONTAGRO Executive Secretary, together with the members of the FONTAGRO Board of Directors. The panel discussed core themes such as the importance of working together to promote strategic partnerships to address the challenges of the region, among others. 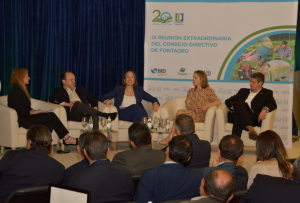 Photo: IDB and IICA authorities at the meeting of the FONTAGRO Board of Directors

Lastly, the Second Meeting of FONTAGRO’s Regional Agricultural Communications Network was held during the Thirteenth Workshop on the Technical Monitoring of FONTAGRO Projects. Its purpose was to bring together professionals and communicators to present examples of best communications practices at the national level and to share experiences in connection with their efforts to disseminate project results and other regional communications and knowledge management initiatives, as well as their future plans. 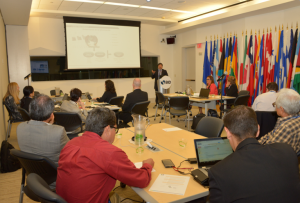 PHOTO: Presentation during the Network meeting

Seven of the current projects presented during the Thirteenth Workshop on the Technical Monitoring of FONTAGRO Projects, and that are scheduled to conclude this year, vied for the Eighth FONTAGRO Excellence Award. The award is given by FONTAGRO to the best project and to the research team and institutions that have demonstrated excellence in the execution of project activities. The 2018 award was given to the project “Integrated adaptation and mitigation strategy for LAC livestock systems,” headed up by Marta Alfaro, researcher and Assistant Director at the National Institute for Agricultural Innovation (INIA) of Chile, and executed jointly with the following organizations: National Institute for Innovation in Agricultural Technology (INTA), Argentina, Fundación PROINPA, Bolivia, and the Center for Research (CICA) at the Universidad de Costa Rica. 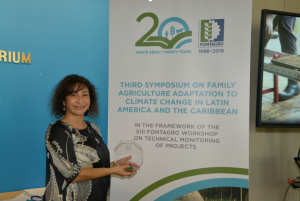 As the weeklong celebration drew to a close, FONTAGRO’s president, Armando Bustillo, concluded that, “in our 20 years of existence we have played a fundamental role in the quest for technological solutions adapted to the needs and reality of family farmers. That is our contribution to making the rural areas of our region competitive, economically viable, and, at the same time, inclusive and sustainable. This is the only way to not only improve the lives of the millions of people who live in those rural areas, but also to build more just and humane societies and countries.”

For more information about the meeting, write to: fontagro@iadb.org

FONTAGRO is a unique regional cooperation mechanism that promotes innovation in family farming, competitiveness, and food security. It was established in 1998 and is comprised of 15 member states that have contributed approximately US$100 million in capital. FONTAGRO is sponsored by the Inter-American Development Bank (IDB) and the Inter-American Institute for Cooperation on Agriculture (IICA). Its Technical and Administrative Secretariat is based at IDB headquarters in Washington, D.C. FONTAGRO has co-financed more than 135 projects and initiatives for its member countries in the amount of nearly US$105.5 million, including contributions from other funders and executing agencies. The countries that make up FONTAGRO are Argentina, Bolivia, Chile, Colombia, Costa Rica, Dominican Republic, Ecuador, Honduras, Nicaragua, Panama, Paraguay, Peru, Spain, Uruguay, and Venezuela.