FONTAGRO officials visited ongoing projects led by Nicaragua to learn about their progress. 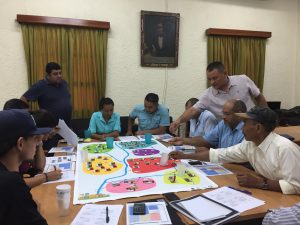 (Washington, D.C., May 22, 2017) From May 14 to 18, 2017, FONTAGRO officials carried out a mission to Nicaragua with the objective of learning about the progress of three projects cofinanced by FONTAGRO in the country.

The agenda included meetings with executing agencies and a visit to small farms, with the support of Nicaragua’s Agricultural Technology Institute (INTA Nicaragua).

Water Resources in Banana Communities
One of the projects visited is also cofinanced by the Global Environment Facility (GEF) and the IDB, and it is led by Universidad Nacional Autónoma de Nicaragua, León. Within the framework of the visit, a “cooperation and consensus” simulation exercise was carried out to improve water management in a local community. Farmers took part in the exercise, analyzing the impact of water movements in coffee, banana, and staple grain production systems when using different levels of technology.

As a result of the cooperation process, participants reached agreements on the investments implementation for joint practices to reduce water pollution, achieve crop diversification, improve productivity, and, increase revenue. The project covers farming communities involved in planting coffee, bananas, and shade trees in the department of Jinotega and represents a total of 97 small and medium-sized producers. The following cooperatives participate in the project: Monte Cristo (27 members), América (25 members), El Sardinal (23 members), and El Sarayal (22 members).

To date, the project has generated a diagnosis for producers in a pedagogical and dynamic manner. The diagnosis included a simulation of water use in agricultural production—including quantity and quality—in relation to climate variability, aimed at generating individual and collective learning in Jinotega’s communities.

Resilient Livelihoods for Farming Families in the Dry Corridor
This project aims at increasing the climate resilience of 3,600 Nicaraguan and Honduran producers through the development of technological innovations. One of these innovations is the development of community seed banks, which allows for the best varieties of beans and maize to be selected locally, thus enabling their multiplication and distribution to producers in the community, ensuring their availability, and guaranteeing local food security.

To this end, producers have been trained in techniques involving “participatory plant breeding of native varieties”, as well as in soil, pest, and disease management. These producers have now become “promoters” by following the “from technician to promoter and from promoter to producer” practice.

During the mission, FONTAGRO officials visited two seed banks, one in the department of Estelí and one in Madriz. Together, producers were able to identify a total of 218 bean varieties that have superior yields. The active participation of women in decision-making and activity implementation is highlighted in this project. 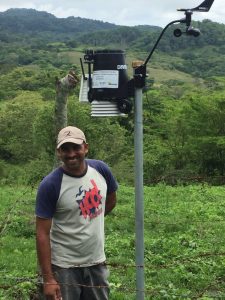 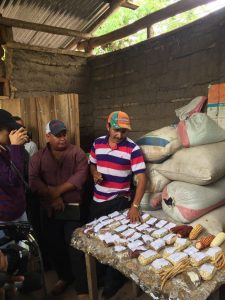 Biointensive Farming for Rural Families
The project aims at transferring a biointensive farming methodology to producers in the Dry Corridor. This ecological food production practice, which originated diversified diet for orchards in California, promotes including species that contain 60% carbon, 30% calories, and 10% vitamins. The project involves approximately 70 producers who participate in these activities and plant “super foods,” such as Amaranthus and Hibiscus, in their orchards. Nicaragua already has 20 specialists who are certified in this kind of farming. During the mission, FONTAGRO officials visited centers that provide education to producers, carry out technical training courses, and train instructors in the field. They also visited farms that belong to project producers in Chorotega and Somoto.

Meeting with Authorities
During the mission, FONTAGRO officials met with INTA Nicaragua officials to evaluate other initiatives in which Nicaragua participates. One of the initiatives involves the sustainable production of rice varieties with better water management, as well as the possibility of Nicaragua’s participation in the low-greenhouse-gas-emission livestock platform.

****
ABOUT FONTAGRO
FONTAGRO is a unique regional cooperation mechanism that promotes family agriculture, competitiveness, and food security. It was established in 1998 and it includes fifteen member countries that have contributed a capital of some $100 million. FONTAGRO is sponsored by the Inter-American Development Bank (IDB) and the Inter-American Institute for Cooperation on Agriculture (IICA). Its Technical Administrative Secretariat is based at IDB headquarters in Washington, D.C. FONTAGRO has cofinanced more than 100 projects and initiatives in its member countries for an approximate amount of $88.7 million, including contributions from other sources of funding and executing agencies. Its member countries are Argentina, Bolivia, Chile, Colombia, Costa Rica, Dominican Republic, Ecuador, Honduras, Nicaragua, Panama, Paraguay, Peru, Spain, Uruguay, and Venezuela.