During the meeting, a draft project was prepared and matters of importance to the sector, such as output, productivity, quality, industry and markets, regulations, and the dissemination of knowledge were identified. 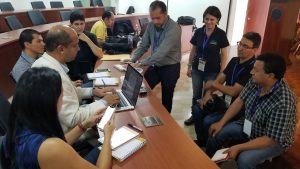 FONTAGRO is funding this initiative, via a mechanism known as a “seed fund.” Creation of the platform is being proposed for the first phase and will be spearheaded by Ecuador’s National Institute for Agricultural Research (INIAP) and the ESPOL Polytechnic School, together with research institutions from the region and public and private sector agencies.

The workshop was attended by nine of the region’s countries, and during it, work was done to devise a broader project, in which different activities of key interest to the institutions of the region were identified.

The project was developed in ESPOL’s facilities in Guayaquil using participatory methodologies implemented by FONTAGRO, together with INIAP, in an effort to reach consensus on the activities and aspects most important to the countries, namely cacao output and productivity, strategies for mitigating cadmium, the impact of new regulations, and development of a training plan to boost the knowledge generated and make it more accessible in the countries.

The group also visited INIAP’s Pichilingue Tropical Experimental Station, in the province of Los Ríos, to learn about the experimental tests being done on the new cacao clones released by INIAP in Ecuador in 2017, and that are available to farmers. Thereafter, a visit was made to the soils laboratory and the recently opened cacao quality lab.

In this regard, Dr. Juan Manuel Domínguez, Executive Director of INIAP and member, representing Ecuador, of FONTAGRO’s Board of Directors, stated that “for Ecuador it is important for this initiative to be submitted to FONTAGRO for funding next October during the Board meeting being held in Guayaquil.”

FONTAGRO is extending an invitation to agencies interested in being a part of the platform to formalize such interest by sending a counterpart contribution letter (link) indicating a cash or value contribution, by September 20.

FONTAGRO is a sustainable co-financing mechanism that promotes research, development, and innovation in agriculture in Latin America and the Caribbean. It was established in 1998 and is comprised of 15 member states that have contributed approximately US$100 million in capital. FONTAGRO is sponsored by the Inter-American Development Bank (IDB) and the Inter-American Institute for Cooperation on Agriculture (IICA). Its Technical and Administrative Secretariat is based at IDB headquarters in Washington, D.C. FONTAGRO has co-financed more than 135 projects and initiatives for its member countries in the amount of nearly US$105.5 million, including contributions from other funders and executing agencies. The countries that conform FONTAGRO are Argentina, Bolivia, Chile, Colombia, Costa Rica, Dominican Republic, Ecuador, Honduras, Nicaragua, Panama, Paraguay, Peru, Spain, Uruguay, and Venezuela.